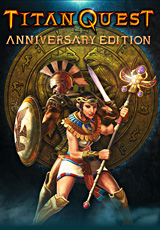 Media_market information about the seller and his items
offlineAsk a question

In commemoration of the tenth anniversary of its release, Titan Quest will appear in a completely new light. Edition Anniversary Edition brings together Titan Quest and Titan Quest Immortal Throne in one game, which has become much better and will present impressions of the highest level in the role-playing action genre.

Differences Anniversary Edition
Multiuser mode is restored, improved and got new features, such as built-in voice chat and NAT support, providing the best network connection
Now supports more screen resolutions, increased camera distance and added the ability to scale the interface
Improved performance and stability of the game
Support for creators of custom modifications has been expanded, thanks to new features and full integration with Steam Workshop
A full review of the balance and improvement of all schools of skill, types of damage, unique items and sets
A lot of fixes and other improvements, including all the corrections made by the community of players over the past ten years
Increased number of tests and awards for large groups of players at high difficulty levels
Dozens of new heroes and bosses
Improved the artificial intelligence of your enemies and friends
Life has become easier and more fun, thanks to the speed setting, increased stock of consumables, the ability to quickly pick up dropped items and carry even more things
Less opportunities for dishonest game, the exclusion of test items and comparison of the installed modifications in the multiplayer game
The ability to invite your friends from Steam
Steam Achievements
Collectible cards on Steam

Titan Quest is a collector´s re-release of the popular RPG, which included: the original Titan Quest, a role-playing game from the creator of Age of Empires, Brian Sullivan, in which the Parthenon, the Knossos labyrinth, the Great Pyramids and the Hanging Gardens of the Semiramis fought again to imprison the titans who escaped from The place of his eternal exile, Tartarus, and Immortal Throne, an addition in which the player has to challenge Cerberus himself, cross Styx, unravel the prophesy of Tiresias, fight side by side with Achilles, Agamemnon and Odysseus, To defeat powerful enemies. Also included in the edition will be a unique soundtrack with the best compositions from the game.

Features:
An epic adventure in the ancient world.
Included are the original Titan Quest and the Titan Quest add-on: Immortal Throne.
Impressive 3D graphics with an incredible level of detail and realism.
Exciting frantic action.
An extensive class system and modifiable skills.
Infinite, fascinating game world and no download screens!
More than a thousand unique and legendary items of equipment.
Challenge the Titans alone or share the glory of victory with your friends, going to seek adventure together.

By purchasing a digital product, you agree to the terms of its purchase
Remember that according to the rules this product is not returnable and exchangeable
After the moment of transfer of the goods to the buyer, the seller is not responsible for it


How to start playing Titan Quest Anniversary Edition:
• If the Steam client is not installed, download and install it.
• Log in to your Steam account or register a new one if you do not already have one.
• Go to the "Games" section and select "Activate via Steam" there.
•Enter activation key
• After that, the game will be displayed in the list, and you can download the Titan Quest Anniversary Edition.