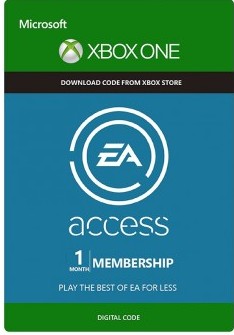 persme information about the seller and his items
offlineAsk a question

After the purchase you get a key EA Access for 1 month for XBOX ONE.

What is EA Access?
EA Access - is a subscription only for Xbox One, which allows you to play more games for less money. Play a game of ever-growing collection, which includes more than 10 games in The Vault, play new games from EA before they enter the market and save 10% on digital purchases EA on Xbox One, including full games, pre-orders, additions, points Ultimate Team ™ Points and everything else. Apply certain conditions, limitations and exclusions.

What is a Games Library The Vault?
Game room The Vault - a constantly growing collection of the best games from EA for the Xbox One, you can upload and who can play thanks to the active subscription EA Access. Enjoy unlimited time in these games from EA like Battlefield 4 ™, FIFA 15, Plants vs. Zombies ™ Garden Warfare, Madden NFL 15, Need for Speed ​​™ Rivals and others, and, and more games will be available later.

What is the difference demo and trial versions of EA Access?
Demos are part of the game, which will allow to understand the game. Playing in the same trial game EA Access, you play the full version of the game for a limited period of time before the game on the market. And if you buy the game after its release on the market, you will be able to continue playing from the point where you left off - your progress and statistics remain.

1. Click the Xbox button to open the guide, and then click Home. Verify that you are logged on to the Microsoft account for which you want to activate the code.
2. On the Home page, scroll to the right and select the Microsoft Store icon.
3. Select Use code.
4. Use the onscreen keyboard to enter the 25-digit code on the Activate Code or Gift Card screen, and then click Next to complete the process. Do not enter hyphens: the system will take care of them automatically.