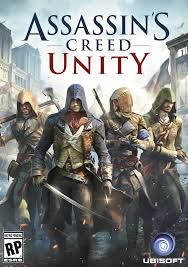 Uploaded: 16.03.2020
Content: text 19 symbols
Loyalty discount! If the total amount of your purchases from the seller mrakk more than:
If you want to know your discount rate, please provide your email:

mrakk information about the seller and his items
offlineAsk a question

LICENSE KEY Assassin´s Creed Unity displayed in the BROWSER AND COME TO YOUR E-MAIL AFTER AUTOMATIC PAYMENT !!!

●● DLC ●●
«Assassin´s Creed: Unity (Unity) Special Edition" contains an additional task for a single game (30 minutes of playing time):
"Chemical revolution"
Antoine Laurent de Lavoisier called the father of modern chemistry. He was able to develop a formula for creating a poisoned bombs. Unfortunately, his record and kidnapped. The task - to help Lavoisier escape from the kidnappers and return the formula bomb.

Game description:
In «Assassin´s Creed: Unity (Unity)," the player will be able to influence the events of the French Revolution, becoming the protagonist of a fascinating story that unfolds in the historical scenery.

The new version of the engine Anvil Engine, which creates «Assassin´s Creed: Unity", has significantly improved gameplay and expand the character control.

An exciting adventure «Assassin´s Creed: Unity" will be of interest not only to those who love action-packed single-player campaign. In co-op mode, you can collect a small fraternity of 2-4 people to take up the implementation team interesting jobs. In addition, each player will be able to use all the skills and abilities obtained during the passage of the plot of the game.

• If you do not set Uplay client, download and install it. (Http://uplay.ubi.com/)
• Sign in to your Uplay account or register a new one if you do not already have one;
• Click on the image of the "Gears" and select "Activate Product";
• Enter activation key;
• After that, the game will be displayed in the library of games and you can download.